Today, I have a special treat for you.

My wife and I were enjoying a frosty beverage on the patio of a newly discovered watering hole, when we struck up a conversation with Nicholas, who was doing a GREAT job keeping our glasses full.

I don’t remember exactly HOW we got onto the subject but at some point, I mentioned to him that I was a Butcher.

His eyes immediately LIT UP and he excitedly told me of his passion to learn everything he could about the business. So much so that, he even moved to France to study the dying art of Charcuterie.

I told him about my humble musings here at Carnivore Confidential, and asked him if he would be interested in writing a guest post for my Blog. What follows is his kind offering to this space … I hope you enjoy it.

Charcuterie, and the Law of the 41st Pig

I thought I would begin my blogging experience with the question I get asked most by other butchers and cooks who have followed in the recent trend of returning to the Old Ways- What is charcuterie?

Butchery, like all other trades, has a lot of loose terms that have been watered down over the years until they barely resemble what they once meant.  If you trace these terms and ideas back to their origins, you start to understand why someone would even want to invest such time and effort doing it in the first place (necessity is the mother of all invention).

Charcuterie is a term used by most today to mean any meat that has been ground, shoved into a casing, and cured or cooked (a customer once asked for “tube meat”…head shake). As with all other of the great foods of this world, industrialization has turned what was once a necessity into a convenience, killing flavour and integrity along with it. The idea that charcuterie was once a way to utilize every part of an animal and create profit, lost. Now our masters have all retired or gone out of business and did not fathom to pass along their dying trade on since it no longer applied to the modern world…or so they thought.

As I began my butchery career, charcuterie, at least as how you would read about it in the old Euro nations cookbooks, seemed to be dead. Yes, all butchers make their own sausages, grind meats and produce other value added products to deal with the dreaded 20% (the general trim loss of an animal), but it doesn’t take long to realize that the more meat you sell, the more that 20% gets larger to the detriment of profitability everyday. This is all less of an annoyance, depending on where and how you work, but all butchers, no matter what or who, go home and think about the profit killing 20%. I mean champagne and caviar or Pabst and Spam, your choice!

Being younger, dumber, and crazier than I am today, I knew that there had to be a better way than the status quo. I did some research, ate ramen and peanut-butter for about a year, then packed my bags and flew to Agen, France where I met Kate Hill from Kitchen at Camont. There we worked with the Chapolard family on their families FermeBaradieu where they literally grow the food that they feed to the pigs, raise and breed them, slaughter them at their local abattoir and then turn them into cuts and charcuterie that they sell throughout the week(ends). Pretty much every chefs and butchers idea of the perfect circle of food!

The 100 km diet doesn’t exist in this world, everything is from 5 feet to 5 km away from you at all times.We smoked our meats in a chimney that was made in the 1800’s that used to heat the original house and hung our Noix de Jambon in the families’ grandmother’s old room at the back of the house, because it had the right draft running through it. Cracked black pepper covered the floor from all the masterpieces that came before- I was told as an antiseptic. The term “old school” doesn’t even begin to do it justice.

If you wanted to see where the idea of charcuterie came from, how it has classically been done for centuries and why it is so vital to the French lifestyle, this was THE place.

The Chapolards (Bruno, Marc, Jacques, Cécile, Dominique & Christiane) make their living off of their parent’s farm and each has their role and skill that makes it work. What struck me most about this whole experience is that this entire family makes their living off of only twelve pigs a week – completely mind numbing to think about. Talk about squeezing every last dollar out of an animal while creating culinary masterpieces; these people have nailed it.

Every day at lunch, graciously prepared by Christiane, we would sit with the family and discuss the business and marketing of what they were doing. They are not “Maple Leaf” with ideas of going large scale; they follow the law of the 41st pig. Simply put, at forty pigs, you’re happy and can make profitability without having to over work yourself. However, as soon as you add one more pig, all of a sudden you need to hire more people to help you or expensive equipment to do it for you. Now to pay for all that new debt/cost you’ve inherited, you need to raise sixty pigs instead of forty-one, meaning now you need more land for your additional pigs, etc…you see where this is going?

If you are going to raise and process an animal, then you need to figure out how to create the highest quality of product for the least amount, all the while keeping the value per pound as high as possible. Every time you trim a tenderloin or roast you’ve taken 5-25$ per pound and turned it into ground meat pricing. To make up for this lack of profitability, you then need to cut and sell more of a lesser product or sell more to a client who may or may not want it; your business plan turns into a game of volume rather than quality. The Law of the 41st pig strikes again! So naturally you freeze it, wait for someone making burgers to walk into your shop, and sell it for cost or less.

Charcuterie is THE tool by which you can create a high end product that keeps its dollar value for a longer period of time. What’s the saying, work smarter not harder?

Charcuterie is the great equalizer in the food industry, a tool to create profitability and fully utilize an animal that has given its life for gastronomy. Any restaurant, bar, or butcher shop who wants to process their own animals to offer a higher quality of meat to their clientele can use this tool, restaurants even more so than butcher shops. That being said, we are all subject to laws and regulations by which we must abide. Again work smarter not harder and figure out what you can and cannot do within your ability and applicable regulations.

To that end, I have even once made bacon-scented candles out of useless beef fat and bacon ends (the mandle-candle). By the end of the year, instead of worrying how to cover the dreaded 20% loss, your improved profitability will be lighting big fat stogies for you, all while serving you Dom Perrignon and caviar on a silver platter.

Love your trade, love your animals and love your food. Life is too short to eat anything less than perfection. 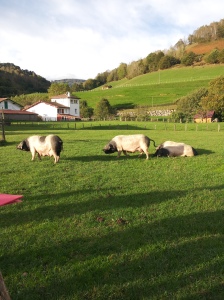 Nicholas says he “fell into the trade” out of a desire to become a better cook and discovered butchery was so much more than a man with a knife and a carcass. He went on to say that Butchery opened his eyes to the idea that to be a true artisan and tradesman one needs to study and learn the craft and develop the relationship between where our food comes from and the clients we serve it to. Nicholas sums it all up by finishing with … Hug a farmer AND, your butcher.

So, there you have it Carnivores …

You’ll get an email notice every time I write something new … and, I PROMISE … you won’t get bombarded with spam. WordPress is very responsible. 🙂

iThere are no comments

Other noteworthy posts by the Carnivore

Begin typing your search above and press return to search. Press Esc to cancel.